Complete with blog, projects, and porfolio page. Check it out! Thanks!
Posted by Britny Arnett at 2:35 PM No comments: 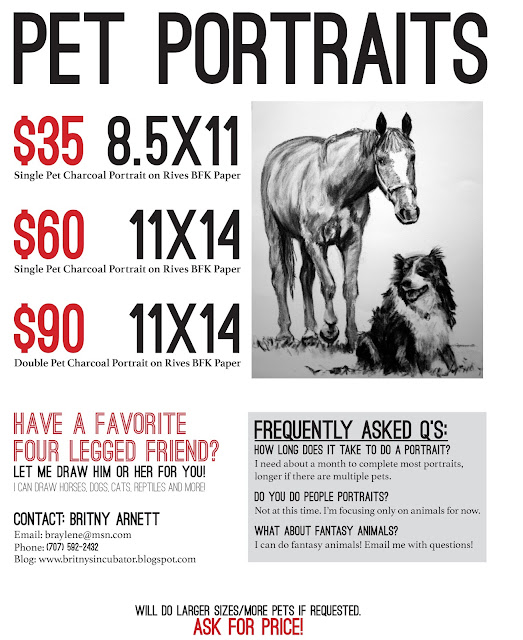 Posted by Britny Arnett at 8:47 PM No comments:

Hi guys! Here's a sort of a short process post for a recent commission I did. It had a dog in it, which was an interesting challenge, but I think it turned out well! 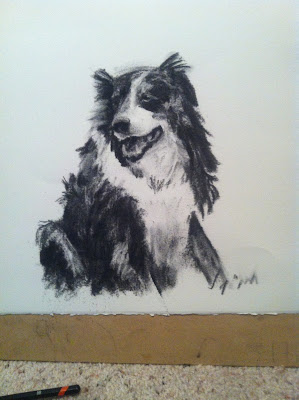 Adding the horse behind the dog was also a bit of a challenge. I had a hard time picking the right size for the horse to be, especially since I didn't want to cut him off. 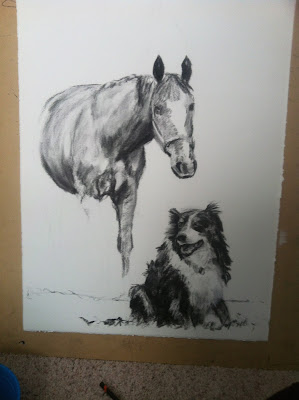 Not cutting the horse off was hard, considering none of my reference had this angle in it. I had to pull together all my knowledge of foreshortening and structure to make it work. 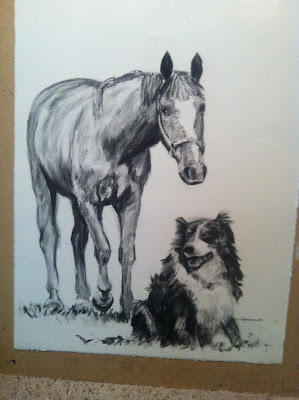 Nearing the end, I was super happy with it and the client was too! I learned a lot about dog's mouths and how much detail I can leave out! The kneaded eraser was a huge help for the dog. 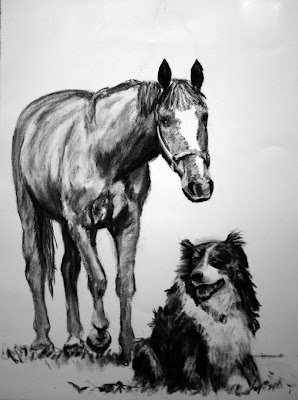 You'll notice I didn't do any under drawing for this. That was because I have found that outlining is my go-to method of drawing. It's what I do when I doodle... and when I don't want to think. It's only when I make a mess first that I can really make stuff look good.

Posted by Britny Arnett at 6:45 PM No comments:

I've spent the past few weeks trying to improve my study of horses and equines through charcoal drawing. These are some of the best. Thanks for checking them out!
Posted by Britny Arnett at 4:48 AM No comments:

We were out of pancake mix.
My stomach rumbled.
“I want pancakes,” I told my husband, Josh.
“There’s no pancake mix,” he pointed out.
“People were eating pancakes before pancake mix, you know,” I pulled out my ipad and brought up pinterest. With a few swipes and a click, I found a homemade pancake recipe that looked pretty good. I set up the pad and read the ingredients list. Josh wisely withdrew from the kitchen to someplace safe. Britny was experimenting.
Flour. Baking powder. Sugar. Check check check. Melted butter? Vanilla? Whoa! These were fancy. I decided I should probably follow the instructions, which is not normally how I do things. So I pulled out my measuring utensils and scrupulously spooned my flour and sugar into the bowl. Next came three whole teaspoons of baking powder. I wasn’t sure that was necessary, but I put my trust in pinterest and dumped it in anyway.
The milk, melted butter, and egg were beat together in a separate bowl.
And then I realized that the recipe specifically said not to do that. Oops. I mixed everything together and put the skillet on the stove.
For the next twenty minutes, I made 10 perfect, non-burnt pancakes. They smelled amazing and my mouth could hardly stop drooling. Now THIS was an accomplishment! I was certain that these were the best pancakes I had ever made in my entire life. With glee, I skipped to the living room.
“Breakfast is ready!” I smiled, certain that Josh would share in my enthusiasm. We grabbed plates and forks and knives and butter and syrup and sat on our living room floor. The stack of pancakes was split and the prayer was said. I tore into the stack of deliciousness with ravenous fury.
It was glorious. Never had I tasted a more scrumptious pancake. I giggled and clapped. My exploits had been a marvelous success! I took many glory filled bites and sighed. I turned to Josh, who was chomping away at his own fluffy, syrupy meal.
“So?” I smiled at him.
“What?” he responded, smacking his lips and stabbing another pancake with his fork.
“What do you think?” I wanted to see if he thought they were the best pancakes he ever had.
“They’re good,” he responded
“Good?” I gave him one of my special you-should-probably-use-a-different-word looks.
“They’re good,” he repeated. My heart sank, but my spirit rose playfully.
“They’re not amazing fantabulous pancakes full of sugary buttery awesome?” I was trying to get a more enthusiastic response.
“They’re good,” he repeated for the third time, still chomping away. This was the same response I had received when he ate my horrible lentil broccoli potato disaster. I frowned. He stopped chewing.
“What?” he garbled with his mouth full.
“You don’t like my pancakes,” I folded my arms like a stubborn child.
“But I said they were good,” my poor husband was clearly confused. He was a professional writer, surely he could use a different word to define my fantastic meal!
After a period of strange silence and weird looks at each other, I decided to forgive his lack of expanded vocabulary toward my exquisite culinary creation.
“You know that moment when you’re really excited about something and you try to share your excitement with someone? And they’re not excited as you are? And then you feel sad?” I blurted as I grabbed my empty plate.
“A buzzkill?” Josh took a swig of his milk to wash down his last piece of pancake.
“Yeah,” I stood to take the plates away to the kitchen. “That.”
Deep down, I knew the breakfast was one of the best breakfasts I had made and I always would be proud of that. I just wished Josh had shared in my enthusiasm. After all, what is happiness if it isn’t shared? I sighed.
“Britny,” Josh entered the kitchen as I was scrubbing the plates.
“Yeah?”
“The pancakes were really good.”
Posted by Britny Arnett at 8:17 PM No comments:

The Final Project for Painting Drama 2 was a re-do assignment. We took one of our previous paintings from the class and repainted it.

So, I chose my "Hi-Key Exploration of Green" piece.

I chose this one because my classmates felt it had potential to be something more. But the process of unlocking that potential was very frustrating. If I'm honest, I wasn't quite thrilled to redo this one.

But I trusted my peers and began to work it. So here's a visual summary of what I did.

I tried to make a more interesting painting and to make it feel more cohesive, with all the elements working together. Part of the critique I received for the original painting was that the character didn't feel as if it belonged. It just didn't have the integrity of the environment around it.

So I really tried to make everything feel part of the same world. The shapes of the trees, the topography, camera angle, flowers, lighting, values...these were all things I thought about while working.

The class ended with a bittersweet eight hour meeting in which everyone was asked a question about what we learned and what our plans were.

It was difficult to describe the sheer amount of knowledge that came from this class. The moments of clarity, where determination overcame fear, the discoveries of what color can do...

I don't remember what I answered, but I remember the recommendation that Chris and my classmates gave me. It was:


It makes sense. I can see how my work will improve with studies. If you follow me on facebook, you may have noticed that I've been posting a lot of them!

Here's one of the better ones from a few weeks ago: 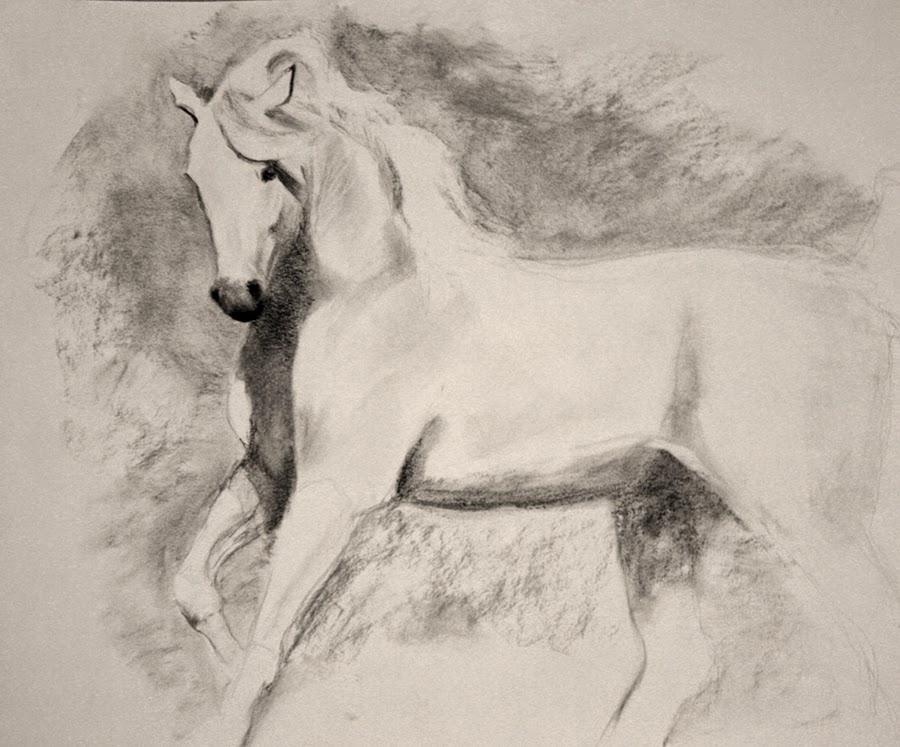 Painting Drama has helped me find my feet as a storyteller and an artist. I can't recommend it enough. If you're looking for inspiration and a good group of people to work with, please check it out.

If you have any questions regarding my experience with the class or about the projects I'm working on please leave a comment or find me on facebook! I love to meet other artists or writers.

Posted by Britny Arnett at 4:27 PM No comments:

One of the biggest challenges in Painting Drama 2 is painting an entire color script. It was hard, so hard that I forgot I was painting. I forgot to let my hair down and just discover things.
In the previous post, I talked about how I learned to let go of perfectionism. Well. During the color script weeks, I forgot that lesson.

I think as artists, and maybe even as humans, we can forget the things that ease stress on ourselves.

So, I focused on all the wrong points for the color script, like local color and accuracy. And it turned out...well... not the best. I should have focused more on story, lighting, and mood. 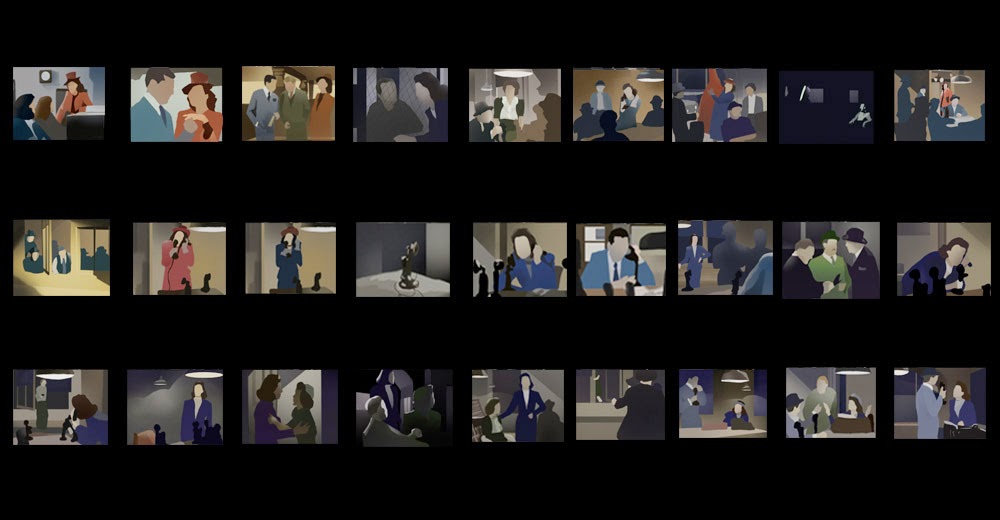 This was the Time of Day project. After a huge challenge of a color script, these seemed like a breath of fresh air. I was reminded, once again, to let go and paint, to try new things.

The unicorn is about to enter a forbidden and treacherous land. A land where unicorns have never returned. Had Chris allowed it, I would have considered these my best works of Painting Drama 2.

There was one final assignment and, I have to admit, it's one of the best pieces I've ever expressed. I'll go more into detail for that in Part 3 (the final part)! So stay tuned!


Posted by Britny Arnett at 7:16 PM No comments: